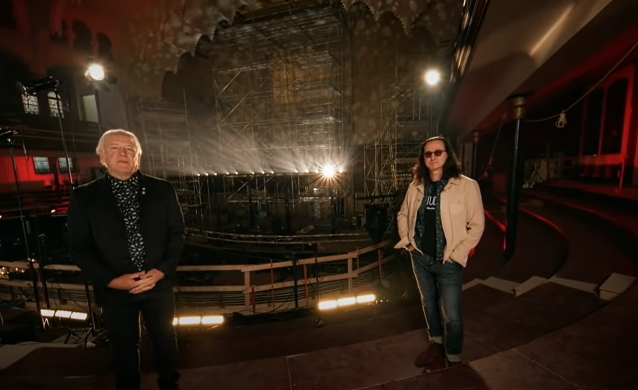 RUSH legends Geddy Lee and Alex Lifeson presented THE TRAGICALLY HIP with the Humanitarian Award at last night's Juno Awards, the Canadian equivalent of the Grammys. The popular Canadian band broke up in 2018 after death of frontman Gord Downie at age 53 from brain cancer. RUSH drummer Neil Peart also died of the same disease.

Lifeson and Lee presented the award to the remaining members of THE TRAGICALLY HIP, Rob Baker, Paul Langlois, Johnny Fay, Gord Sinclair and Gord's brother Patrick Downie. Langlois, Baker, Sinclair and Fay also joined fellow Canadian musician Feist for a performance of "It's A Good Life If You Don't Weaken", which appeared on THE HIP's 2002 album "In Violet Light".

This year's Junos were presented over two nights, Friday June 4 and Sunday June 6. Both shows were virtual affairs, with Sunday's show including eight performances and six award presentations.

The 50th annual event was broadcast nationwide, and it featured show-stopping performances from some of the country's brightest music stars and appearances from the nation's most recognizable personalities.